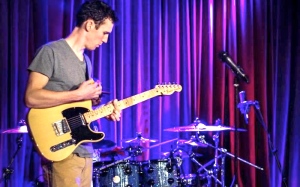 Disclaimer: I’m late with this post. The following events refer to last week.

Sunday morning I woke up feeling like a crumpled piece of notebook paper— four hours of sleep is not enough to relieve the effects of a night of steady debauchery. Yet at the sound of my 9:30am alarm I dutifully unfurled my limbs and stood up to prepare for my solo guitar gig at the Afterthought’s Sunday Brunch. During my performance, I focused intensely on the music, and performed with a loose, expressive, nuanced delivery — yet I also made a handful of stupid mistakes (missing familiar passages, dropping the tempo, blanking completely, etc…), undoubtedly a result of copious amounts of shenanigans the night before. I do regret perpetuating the stereotype of the partied out musician, but sometimes I just like to cut loose with my friends. I disagree, however, with the myth that musicians play or write better when they are drunk or high; and I reject the romanticized image of the freewheeling artist who sleeps, eats, drinks, smokes, writes, performs, travels, and has sex simply whenever the spirit moves him. Believe me, I’m as attracted to this picture as anyone, but it isn’t real. Life lived in an unbroken stream of creativity would be incoherent— musicians (like everyone else) benefit from structure and routine.

With this fact in mind, monday morning I woke at 6am, loosened up with a chi-kung routine, drank a cup of tea, and practiced Jazz guitar for an hour and a half. I ate breakfast and then worked on the drum and guitar tracks for a Pop-Rock song I’m recording. After Lunch I took a long siesta, and then drove to River City Coffee to drink a cup and begin writing this blog post. Lastly, I enjoyed a pleasant dinner date with a pretty girl I met on Tinder (I’m not ashamed). On paper, this was my perfect work-day: I woke up early and engaged in the art (recording), craft (practicing), and critique (blogging) of music before some relaxing social time. In reality, I wasn’t all that effective at any particular task; I went through the motions during practice, didn’t record any great guitar tracks, and wrote a grand total of four sentences of this blog (easily distracted by fellow coffee shoppers). Overall my brain was sluggish from little sleep and I was creatively uninspired, yet I am happy with this day because I made myself do the work that I’ve set out to do. I know that I can’t practice only when I have a gig to prepare for, or write/record only when I am inspired, or blog only when I’ve had a great idea or experience. If I wish to make a livelihood out of the art, craft, and critique of music, I must make a habit of practicing these things.

Tuesday morning I woke again at 6am and repeated my morning routine of chi-kung, caffeine ingestion and practice (this must be a habit now right?). After breakfast I worked on this blog post, writing most of the previous two paragraphs. I ate lunch, took a nap, and then gave three guitar lessons in the evening. Done with work for the day, I went to Allsopp Park to play basketball and workout with my roommate Read (insert shameless plug for Read’s awesome new composting business here). I finished off the night by drinking beers and admiring the full Strawberry Moon with a fond friend. Another perfect day.

Wednesday morning I meant to wake at 6am again, but instead I pushed snooze a thousand times and slid out of bed around 10am, disappointed in my lack of willpower. I did some chi-kung, journaled, and ate breakfast while talking about the stages of life with my other roommate John (insert shameless plug for John’s awesome music here). I reluctantly practiced classical guitar for an hour and had planned to work on this blog, but my practice session flowed into a songwriting session instead. After finishing the song, I ate lunch, took a nap, and then gave a guitar lesson. I finally worked on this blog post starting around 9:30pm. Thus, I didn’t follow my routine. I was slow-witted and weak-willed all day, easily distracted from my work by internet articles and endless Tinder swipes. But ultimately, I did everything I set out to do: I practiced/taught (the craft), wrote a song (the art), and worked on this blog (the critique). I may have been disappointed in myself during the day, but ultimately this is a positive step. It offers nothing for me to be disappointed in. I am here to build habits, and even when my schedule gets thrown off a little, I know that if I am working on the art, craft, and critique everyday, then my work will bear fruit. Good job, Lucas

“There are no two words in the English language more harmful than good job.” As I sit here and congratulate myself for my efforts at being a good musician, I can hear this quote spoken by Terence Fletcher in the brilliantly unnerving film Whiplash. While I don’t ascribe to Fletcher’s brutal motivational tactics (if you haven’t seen the film, here’s another quote demonstrating Fletcher’s pedagogy: “Nieman, you earned the part. Alternates, will you clean the blood off my drumset.”), I do understand this sentiment. To stop and congratulate yourself at any moment, especially early on in your musical development, is to lose the edge that could make you great. The combination of desire for mastery and awareness of where you need to improve will lead to growth. By contrast, contentment with your skills and ignorance of your shortcomings will lead to stagnation.

I had a wonderful guitar teacher at UALR named Michael Carenbauer who approached this point in a more humorous mood than the surly Spencer Fletcher. When I arrived at UALR I thought I was pretty good at the guitar— I could play fast and people seemed to like how I sounded. Yet in an early lesson Mike described what our goal was for learning any Jazz tune: be able to play the chords/melody, know what scale to use for improvising at any moment in the tune, and don’t get lost, all without looking at the music (things I couldn’t yet do). He said that “when you can finally do all of that, you suck.” There I was, a 19 year old who had been playing guitar for nearly a decade, being told that I wasn’t even good enough to suck yet. I was below the suck level! Up until that point, I had always been told I was really good at the guitar, and I think it was no coincidence that I never really practiced very hard either. Determined to at least suck, I consequently practiced and practiced until I could accomplish those tasks. Yet what I learned in the process of practicing hard, is that there is always something else to learn; there’s always something I suck at. This is what is beautiful and frustrating about music: the journey is never over. This is what leads some musicians to such great heights and makes others give up completely. I know that I couldn’t give up music if I tried, thus the only way I can be satisfied is to be conscious of where I can improve and continue to take on the next musical challenge.

I began this post thinking it was going to be about the importance of routine, and it would have been had I kept it up. Having lost my focus and abandoned my routine, I am obviously in a better position to write about how much I suck. The awareness that I suck is after all what compels me to wake up early and practice. What is often unacknowledged is that all great musicians, artists, and writers sucked at one point. Bob Dylan sucked, Aretha Franklin sucked, Picasso sucked, and Shakespeare sucked, but they all stuck with their craft long enough to become great. I suck too, but dammit I’m going to stick with it.