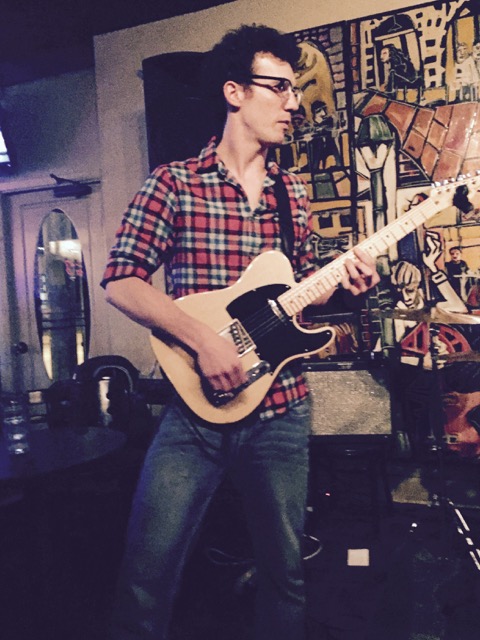 Here’s a secret to life kids: do what you say you are going to do. In 2008 I was 19, I had just dropped out of Lake Forest College after one uninspired semester, and I was telling myself that I was going to write and record an epic album. I imagined all the glory, wealth, and fame I would eventually receive— oh how sweet it would be. Instead, I got a job working at Burge’s Smoked Turkeys & Hams, drank too much, smoked too much (and I’m not talking about the turkeys), and grew depressed. It would have been depressing enough to have a poor diet, not get enough sleep, and live in a disgusting house with three other lethargic 19 year old dudes (as I did), yet added on top was the existential angst of not doing what I had set out to do. I yearned to write and record, and instead I ate catfish sandwiches and partied for a year.

A turning point came when Michael Carenbauer, the Director of Guitar Studies at UALR, walked into Burge’s one day to get some lunch. I had known Michael from my days at the community school of the arts at UALR and he suggested I enroll in some of his guitar classes. Thus, I went to UALR part time for a semester until I decided, with encouragement from my parents and Carenbauer, that I should apply for the Donaghey Scholars Program. I received a full-scholarship and a generous stipend and began classes full-time in the fall of 2009. Unlike at Lake Forest, I was determined to put in my best effort this time around. Fearing a lifetime of making cherry limeades at Burge’s, I told myself that I would work harder than I ever had in school, and that is exactly what I did. In 2013, I graduated summa cum laude with a 4.0 GPA.

Yet the most potent takeaway from my time at UALR was not my institutional success, nor was it the knowledge and skills I gained there— with a bachelor’s in music, and my only tangible skills being the ability to play guitar and write essays, I didn’t exactly have a clear path to follow after college. The most important thing I realized at UALR was that I had the personal ability to set my mind to something and achieve it. So I set upon my next goal: I would be a full time professional musician. I vowed to not take a job unless it was related to music, and thus started hustling to find enough gigs and guitar students to pay my bills. For three years I’ve steadily increased my musicianship, my notoriety, and my income (though all three are certainly modest) as I’ve succeeded in my goal of being a full time musician. I feel very proud of this fact. Although it is rarely a glamorous lifestyle, and I make far less money than some of my professional peers, I have a great psychological peace with the fact that I am doing what I dreamed of doing and what I said I would do.

Those of you who have followed the premise of my recent blog posts know that this is something else that I said I would do. On April 7th I stated that I would release one blog post and one song every week for nine months. For fourteen weeks I have diligently stuck to that promise (if you’re wondering why this week’s song is only Opus 12, it’s because two of the weeks I released songs under an alias). Now I’m going to quit. Yes I realize I just spent the last three and a half paragraphs talking about the importance of doing what you say you are going to do and bragging on myself for doing so! So what! I quit.

The truth is, I’m quitting for a good reason (I can hear your skeptical comments). I made the vow of doing this for nine months before I knew that I would be moving to New York City. Upon deciding that I would attend NYU this fall, I realized that I would not be able to keep recording a song every week. It has taken a lot of time and effort to keep this up, and I will not have that kind of time when I’m trying to keep up with the accelerated pace of grad school and NYC. I will, however, keep doing a blog post every week, I simply won’t be releasing a song.

I’m stopping now primarily because I need to take time to prepare for school. At the beginning of September I have music history and theory placement exams as well as ensemble auditions at NYU. I am going to take the time I had been using to write and record songs and use it instead to practice and study (I received two thick music textbooks to work through yesterday in the mail). Yet another big reason I’ve chosen to cut it off this week is that I am preparing to fulfill another long standing commitment I once made. I’m finally going to record that “epic album” I dreamed about when I was 19!

Ok, it might not be epic; it might not bring me fame or fortune; it might not even be that good. But I once told myself that I would record an album and I know that I won’t be happy unless I do. I’ve booked time with Jason Tedford at Wolfman Studios, recruited my friend and musician extraordinaire Daniel Olah to help me, and later this month will record 12 of my best songs (many of which I released during this project). I’m just gonna do it!

Now I could wrap this all up by saying this: “life is short, just do it!” But that would be a lie. Life isn’t necessarily short. If you aren’t doing that thing that you want to do or that thing you’ve been saying you are going to do, then life will be very long. You’ll have a nagging sense of regret, shame, and yearning and time will just creep slowly by. The good news is that in that long, lingering lifetime you can turn it around at any moment and start doing what you say you’re going to do. Don’t worry if you never become rich or famous— life isn’t about winning the prize, it’s just about doing the damn thing.

Now that was a nice, neat narrative, but the larger reality (like everything in life) is much more complicated and deserves some qualification. I realize that not everyone was born into circumstances as favorable as mine. I have a wonderful supportive family, and while I did not grow up rich, I certainly never felt worried about money. Some people do not have the freedom to set their mind to some lofty ideal because they are simply struggling to get out of a dire economic situation, or even worse, struggling for their survival. I am not here arguing that everyone can easily come up with a dream and achieve it. I understand that in America the chips are stacked greatly against you if you are a person of color, a woman, LGBQT, physically disabled, poor, or anything else that isn’t rich, white, and male. The inequality in our country is horrendous, and must be remedied if we want to continue to pretend to be a civilized country. I wanted in this blog post to offer inspiration and advice, but I’ve quickly bumped into the realization that my perspective is limited due to my fortunate upbringing. I haven’t fully wrapped my head around how to reconcile this. Yet I still feel that there are some good sentiments in this post, and they are here for anyone who might find them useful.

Here’s the final Opus (for now). Sorry to end it on a sad note, but hey, tears are part of life too.